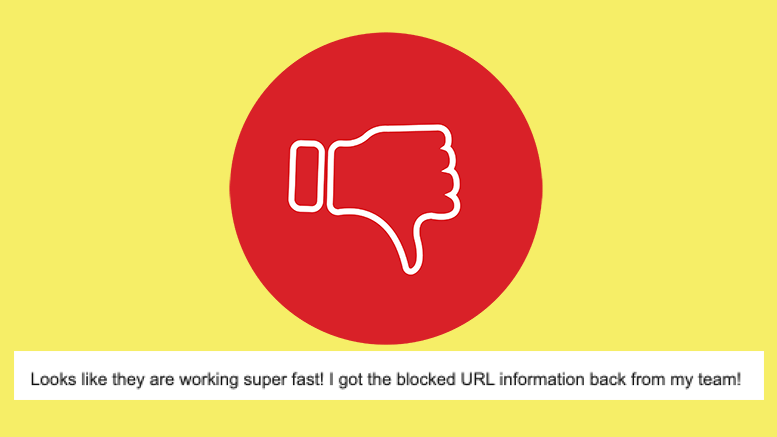 I recently had the unfortunate experience of having one of my websites blocked from Facebook, and it unfortunately took me three months to get it unblocked. I tried all sorts of things, but ultimately, the solution came about (within 24 hours) of contacting their ad support people.

Because nobody wants to miss out on ad revenue!

Second, just to be make sure you’ve crossed the t’s and dotted the i’s, you’ll want to make sure your website is fully debugged. Issues with the website can cause blocking and resolving them will be imperative in your steps to move forward.

To do this, visit developers.facebook.com/tools/debug and enter your website URL.

If you get this message, you’ve confirmed that the website is indeed blocked:

Note, that if you get another message with errors, you should work with your developer to fix those errors as quickly as possible.

This URL has been blocked but also has additional errors which need to be addressed. The “non blocked” errors are not necessarily resulting in your site being blocked, but they could be causing some of the issues and you should try to resolve them, if possible.

Once you’ve confirmed your URL is blocked from, your best bet is to contact their ads department. Because Facebook doesn’t want to miss out on your ad revenue. Note, you can do this even if you have not yet posted an ad. First, you’ll need to set up an Ads Manager account.

Note that for this to work, you will need a Business Manager account. Click here to view how to create one. This is the text I used for my support ticket: I submitted and honestly, I figured it would be like writing a letter to Santa… BUT I WAS WRONG.

Facebook got back to me within 24 hours with an initial response:

And a few hours after that, they unblocked my site, saying that it was a false positive!

Let me tell you, after months of being blocked, this was a massive relief!

And I was also happy to know that I was never blocked for an actual violation! Because nobody wants to feel smarmy.

I hope this is helpful to you who have had your websites blocked from Facebook and don’t know what to do!